Riichi Mahjong is a complex game with many rules and ways to play. This page will not cover everything, but it will cover some more essential concepts.

To start a game of Riichi Mahjong, one of each wind tile is taken and shuffled around. Each player picks a tile and takes a seat corresponding to their wind. East takes their seat first, followed by North to their left, South to their right and West opposite them. The wind tiles are then put back with the rest of the tiles and all tiles are shuffled.

Once all tiles are shuffled, each player makes a wall of face-down tiles that is two tiles high and seventeen tiles long, which are then pushed together in the center of the table. Once this has been done, East as dealer rolls the dice (min. 2). East then counts anti-clockwise around the walls to determine whose wall will be dealt from, starting at his own wall as 1. For example, 4 would mean North's wall is used, whereas 9 would mean East's wall is used and 11 would mean South's wall is used. Once the wall is chosen, the player at that wall rolls the dice. The total from the two dice rolls is then counted from the right-hand side of the wall from the player's view. Once the player has counted to the total, the dealer takes the four tiles to the left of the total result tiles in a two by two form and deals the aforementioned four tiles to themself, then deals the next four in a two by two form to South, and continues to deal in this fashion, clockwise around the wall and anti-clockwise around the table until every player has 12 tiles. Each player is then dealt an additional tile. The dealer then starts off the first round by drawing a fourteenth tile. He then discards a tile, and play continues around the table in this fashion until somebody wins or all tiles bar the dead wall's tiles have been drawn, at which point the game is drawn. Once the game is won or drawn, all tiles are shuffled and the wall and dealing proceeds as for the first round, with dealership being passed on if needed.

At the start of the game, you are dealt 13 tiles from the wall. Your turn begins when you draw a tile from the wall or claim another player's discard. In most cases, if you have four melds and a pair as well as a yaku, you win. Yaku can be found on the associated page.

There are two different kinds of melds: Triples and Straights.

Triples are where you have 3 of the same tile, for example three 5-pins or three hatsu. Triples can be achieved with honours or suits.

Straights are where you have 3 tiles in a numeric continuation, for example 4-5-6 Pin or 6-7-8 Sou. Straights can only be achieved with suits.

Calling is something a player can do if another player discards a tile they need under certain circumstances. When you call, your turn begins immediately after calling. There are three different kinds of meld-creating calls: Chi, Pon, and Kan. There is also a winning call: Ron.

Chi is a call that can be made if the player to your left discards a tile that would complete your straight meld. The called meld is placed face up on the table, usually to the right of the caller's hand, with the discard placed sideways at the leftmost position to signify which tile was called.

Pon is a call that can be made if any player discards a tile that would complete your triple meld. The called meld is placed facing up on the table with the called tile sideways.

There are three different versions of Kan: Closed, Open and Added Open. Once Kan is called, another dora indicator is flipped and the caller draws a supplementary tile.

Open Kan is a call that can be made when any other players discard a tile that you have three of. The meld is revealed with all four tiles face-up, with the discard tile placed sideways. You cannot make an Open Kan with a called meld.

An Added Open Kan is a call that can be made when you have a tile in your hand or draw a tile that you have three of in an open meld. The fourth tile is usually added sideways on top of the other sideways / called tile. 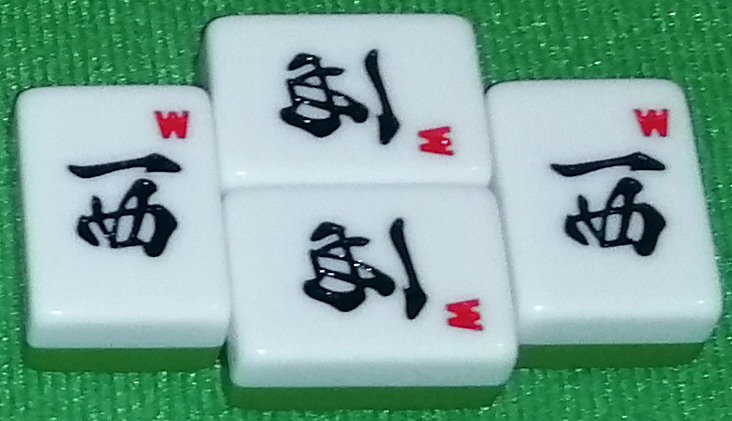 Ron is a call used when another player discards a tile that would let you win the game. When a player calls Ron, the player who discarded the tile must pay the full value of the hand.

Something worth noting is that every call except the closed kan and ron stops you from being able to use certain yaku, including riichi.

Dora tiles are bonus tiles that can add value to a hand. Any tile can be a Dora tile. Dora tiles add the same number of han value as the number of corresponding Dora indicators. You cannot win off of Dora, as it is not counted as a yaku. When the Dora indicator is flipped, the next tile in order is treated as Dora. For example, a 9-Pin Dora indicator would make 1-Pin Dora, and a 5-Sou Dora indicator would make 6-Sou Dora. This also applies to honours, however as honours do not have numbers, the succeeding order of winds is Ton-Nan-Sha-Pei-Ton, and the succeeding order of dragons is Haku-Hatsu-Chun-Haku.

Rounds consist of four hands, and there are two rounds in a Hanchan. A shorter version of a Hanchan known as a Tonpuusen uses only one round. The Prevalent Wind is the wind designated for the round. In Mahjong, there are four rounds, and as such, each wind has one round where it is the prevalent wind. In Riichi Mahjong, games are played in Hanchans and Tonpuusens, and as such only have two rounds or one round respectively. This means that the only prevalent winds in a Hanchan are East and South, East in the first round and South in the second. In a Tonpuusen it is only the East in the first round. A "sudden death" may occur if no player has achieved the goal score by the final regular hand, meaning the game may go into an extra round. Depending on if the game is a Hanchan or Tonpuusen, this round's prevalent wind will either be West or South respectively.

The seat winds rotate counter-clockwise after each hand, meaning each player has a chance to become dealer. This change does not occur if a renchan occurs, which is known as an additional hand in which the seat winds do not rotate. Renchans occur when the dealer wins the hand, an abortive draw happens (no players declare win, all tiles from wall drawn), or the dealer is in tenpai at the exhaustive draw (when no player declares win and all tiles from wall are drawn, players in tenpai reveal hands and receive points from people in noten, a.k.a not in tenpai). The honba count increases by one each time the wind seats do not change, and for each honba the hand value for any player is increased by 300 points. A game cannot end with a renchan on board. In the event of chombo (a penalty for heavy rule violations such as cheating and invalid moves), wind seating may change if the dealer commits the penalty.